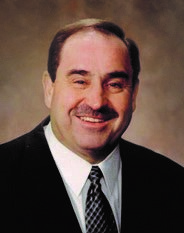 The Frank L. Paden Endowed Scholarship Program was established by Farmers National Banc Corp. to honor Paden for his nearly 40 years of service, dedication and commitment to Farmers National Bank. “I’m sincerely honored to be recognized by the Bank for this scholarship fund,” Frank said. “Ironically, it was my responsibility back in 1980 to implement a new student loan program (for Farmers). Today, it makes me so proud to see the recipients of those funds now run successful businesses in our community.”

Frank spent his entire career with Farmers. Upon graduation from Hiram College with a degree in economics, he began his career with Farmers National Bank in 1974 as a Loan Teller. Through the years, he served in various capacities in the Loan Department until 1991 when he earned a position with the senior management team and was appointed Executive Vice President/Senior Loan Officer. One year later he was elected to the Board of Directors. In March of 1996, Frank was promoted to President, Secretary and Chief Executive Officer of Farmers National Banc Corp. and became Executive Chairman of the Board in July 2010. After nearly 40 years of service, he retired on September 30, 2011. Over the decades, Frank helped Farmers grow from $43 million in assets to more than $1 billion in assets and was a significant participant in the company’s growth with the addition of Farmers Trust Company, Farmers National Investments and Farmers National Insurance.

The Frank L. Paden Endowed Scholarship will benefit students attending one of the 33 independent member colleges of the OFIC or Youngstown State University. Two scholarships will be awarded yearly to current Farmers National Bank employees, children of employees, or dependent grandchildren of Farmers National Banc Corp, Farmers Trust Company or other subsidiaries of the holding company pursuing a bachelor’s degree.

Students who meet the following criteria are encouraged to apply:

The following application materials are required:

Deadline for completion of all elements of the application is May 1, 2022.